So, a lot of you will be heading off to college soon. And campus life brings tons of new experiences. But how to make those new experiences eco-friendly? Let’s start by tackling a big one: getting to class.

Dorms are so expensive. A lot of students, looking for ways  to be more economically savvy, either commute from their parents’ houses (if they’re local) or get apartments off campus.

Either way, the journey to campus usually takes a little longer. Many will opt for walking, but sometimes the apartment is too far. Sometimes it will rain. Sometimes, you’ll just be having a bad day.

The point is, you want to get where you’re going without hurting the environment, right? So here are some suggestions for keeping it green:

Have any more suggestions? What ways are you getting to campus? Do you have a plan? Let us know in a comment below!

We all know how bad Atlanta traffic is, but the truth is that it’s even worse in Europe. Traffic is so bad, and gas is so expensive, that most Europeans rely on an awesome subway system or their bicycles to get around.

In the ATL, our subway system is less than stellar, and we don’t have many bike lanes, so clean commuting can be a challenge. It only gets harder if you live in the suburbs – with a lack of sidewalks and crosswalks, pedestrians have a tough go of it most of the time.

Getting across the street is no easy feat – it seems more like a real-life version of Frogger on super-hard mode.

In most of the world’s big cities, pedestrians are supposed to have the right-of way—but sometimes it just doesn’t work out that way. Especially in Paris. So this French theatre action group, XTNT, decided to take a stand (or a walk) for their pedestrian rights.

The stunt baffled motorists unaccustomed to stopping for pedestrians, and led tons of foot-traffic to cross one of Paris’ busiest intersections without harm.

Hi guys! So, a while back I posted about Historic Fourth Ward Skate Park.  But did you know that the skate park is just a tiny piece of one of Atlanta’s largest and greatest public parks?

Located on the Atlanta BeltLine, Historic Fourth Ward Park is one of the first sections open of the BeltLine project. This project plans to build multiple parks and trails on over 22 miles of old train track. It will encourage more people to get out and get active without polluting the air!

Historic Fourth Ward Park is a beautiful example of the great things to come from the BeltLine project. The park is wonderfully scenic with a wildflower meadow, an urban forest, a lake, a stream and even waterfalls. It’s like going on a road trip without leaving the city!

Among the lawns and scenery there is also a “splash pad,” which is basically a set of fountains for you to cool off in on hot days. Plus, you are not far from a thriving part of town.

Old Fourth Ward is an historic area, which has recently undergone lots of changes, making it a much cooler, safer place to hang out. The park is definitely one of them.  Along with new, recently opened condos, the Masquerade (a concert venue), and some interesting new restaurants, it is succeeding in bringing a whole new caliber of fun, young people (such as yourself) to the area.

Another great thing about the park is its location. From the park it is just a short walk or bike ride to downtown, midtown, Virginia Highlands or the Little Five Points/ Inman park area.

There are no excuses not to stop by!

In our previous post about Apple’s iOS6, we talked about the new Apple maps feature not having transit directions – an absolute necessity for the modern clean commuter.

To their credit, last Friday, Apple admitted to their short-comings with the new maps app, and said that they are hard at work to rectify it. We don’t know what that means for transit riders, specifically, but we’re hopeful.

In the meantime, we’ve done some research and come up with the best alternatives for you to easily navigate around town. Unfortunately, only one of these apps works in Atlanta (for now), but we’d still like to showcase some of the world’s best transit apps. 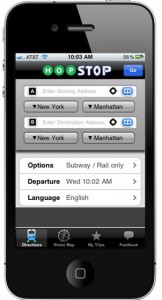 1. Hop Stop – This is one of the top transit apps available, and it’s free! Not only does is work on the iOS system, but also on Android and in a web browser. The best part is that it works with MARTA.

2. NextStop – If you’re ever in NYC and need a great app for getting around on the massive subway system, this app will come in handy. It’s even got train delay notifications.

3. iBart  -This app is for the San Franciscans. It include directions for both trains and buses. This system is created by Embark who have developed several transit routing apps for major cities. Unfortunately Atlanta is not one of them.

4.NYC Mate – This another great app for New Yorkers, but this app has got bus directions too. It even includes New Jersey!

5. LTWatch – One of Canada’s better apps for London-Ontario offers real-time bus tracking in addition to its directions function.

6. London Tube – Obviously this app is for London, but it offers all of the official maps for each system, as well as a trip planning function.

7. Google Maps: No, Google has not released a downloadable maps app for iOS6 (rumor has it that it’s in the works), but all smart phones can access Google Maps through their web browser via the HTML 5 app. It’s no flashy app, but it is the exact same interface that you’ve been using for years.

8. ChiTransit – This app not only provides transit directions for Chicago, but it also tracks the buses and trains in real time.

9. The Transit App –  This one’s got loads of potential; it’s just a matter of ironing out the kinks with iOS6. Offering multi-colored routes, trip planning, departure time, and even a trip memory, this could be the most comprehensive transit app yet. And the best part is that it’s FREE! It is available in 21 major cities–unfortunately, Atlanta is not on the list yet.

Sources say that Atlanta’s MARTA is in the works of outsourcing with some third-party developers to bring Atlantans a better, more powerful app. For now, we recommend you use HopStop, or plan ahead with Google and Marta’s real time bus locator before leaving the house.

On Friday, September 20, Apple’s sixth iPhone (the iPhone 5) went on sale at 7am nationwide. As with the last five iPhones, hordes upon hordes of eager Apple devotees flocked to their nearest Apple or wireless stores, many camping out the night (or even days) before to make sure that they get their hands on the newest, shiniest gadget before it sold out.

But for us clean commuters, you may have already heard that Apple maps had a major shortfall: no public transit directions.

So, yeah, that’s not cool for those of us who take transit and rely on our iPhones to help us correct wrong turns. iOS6 doesn’t leave you completely high and dry, however; It does tease you by offering a “get transit directions” button, which then prompts you to download a third-party public transit app you may (or probably don’t) have. This is what you’ll see:

The Apple maps transit directions actually route you through other apps.

So there’s going to be a getting-used-to-it period. Needless to say, we all loved Google maps. They offered bicycle directions as well as transit directions with up-to-date train and bus schedules in most major cities.

But never fear, iPhone-and-transit users: OnAir is here to help. In an upcoming post, we’ll list our favorite third-party apps for transit and bicycling. For now, points go to Google for facilitating easy directions for clean commuters.

And let’s hope that Apple can get it right with their first iOS6 update. Until then, stay tuned!

Consider how you can get from point A to point B with the least amount of impact to the health of your community and the environment. Of course we think about alternative fuel vehicles and fuel efficiency, but what about the other modes of transportation that we don’t consider. I’m talking about walking, biking, or taking public transit. When we think about green transportation we need to consider smart choices and how to get around with or without a car. We have to learn to drive less. By doing so you not only reduce air pollution but you save money as well.

There is a lot to be said for people powered transportation. Whether it’s riding the train, bus, or walking these all help to reduce the vehicle tailpipes. What’s your commitment? How do you plan on getting there green?